SCOPE AND NATURE OF ECONOMICS

:NATURE AND SCOPE OF ECONOMICS

Economics like other social subject has no specific definition because there are economists that see the subject from different views., they may be interested in different aspect of Economics such as Monetary Economics, Industrial Economics, Business Economics, Welfare Economics, Micro Economics, Macro Economics e.t.c. They therefore define Economics to reflect their interest. Examples are: 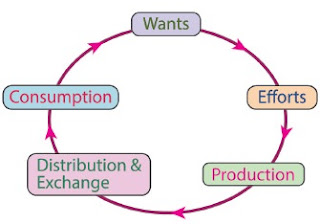 1.Prof. A.C. Piqou: In his book, the economics of welfare, defined economics as the study of human actions in relations to materials or economic welfare.

2.Alfred Marshal: Economics is the study of mankind in other business of life.

3. Adams Smith: He defined economics as an enquiry into the nature and causes of wealth of nations . Adam Smith is regarded as the father of economics theory.

4.H.J Davenport: He said economics is the science that treat phenomena from the standpoint of price”.

7. Pro Lionel C. Robbins (1932): Economics is the science study human behavior as a relationship between ends and scarce means which have alternative uses. It is the most widely accepted definition of economics.

Production can be defined as the conversion of raw materials into finished goods and their distribution to the final consumers in order to satisfy their wants it can also be defined as creation of utility. In production producers allocate its resources so as to get maximum profit out of his production

Distribution is defined as the movement of goods from the manufacturer to the final consumer. National incomes are distributed among the factors of production like land, labour, capital and entrepreneur.

It explains buying and selling of goods and how the price of goods are determined by perfect competition, monopoly, monopolistic, oligopoly and duopoly, public finance

-Secondary production: This involves the conversion of basic raw materials or semi-finished goods into their final stage in which utility is created. At this stage raw materials are processed and transformed into finished goods. For example, cotton is processed into textile. Other products of this stage are motor cars ships and books.

WHY DO WE STUDY ECONOMICS ?

ECONOMICS AS A SCIENCE

Science is a systematized body of knowledge which is ascertained by observation and experiment which as the following attributes:

SCIENCE HAS LAWS AND THEORY: This can be tested through observation and experimentation. Is economics then a science? Yes ,It is a science because it has laws and theories which establish relations between causes and effect and can be tested but is not subject to experimentation like pure science subject

LAWS ARE UNIVERSALLY ACCEPTED: Scientific laws are universally accepted while some laws in economics have universal accessibility e.g. the law of demand and supply.

ECONOMICS AS A SOCIAL SCIENCE

Economy has been argued to be a science because it adopts scientific method but it is not pure science. Economics can be referred to as a social science for some reason.

There are various opportunities opened to a graduate of Economics namely...