Production is the process of making or manufacturing goods and products from raw materials or components. In other words, production takes inputs and uses them to create an output which is fit for consumption. In other words, production is the creation of utilities. Production may be defined as the transformation of raw materials to finished goods and the distribution and provision of goods and services in other to satisfy human wants.   . 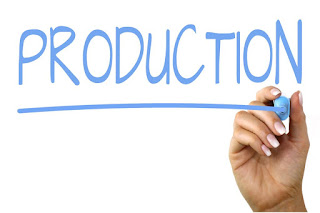 Concept of Total, Marginal and Average Productivity
• TOTAL PRODUCT: It is the entire quantity of a commodity produced with a given quantity of productive resources. i.e. TP = AP × Q
• AVERAGE PRODUCT: This is the total product divided by the amount of variable input used to produce the total output. i.e. AP = TP /Q
• MARGINAL PRODUCT: This is the additional unit of the variable input. .e MP = Change in TP/ Change in Q
The law of diminishing returns
states that as more of the variable factor is added to other factors which are constants output will eventually increase at a decreasing rate, if an increasing quantity of a variable factor are applied to a given qualities of fixed factors, output might increase at first but at a time will come when each additional unit of variable factor will add less to total output than the previous unit.
Importance of the law of diminishing returns
• It determines the shape of short run costl
• It helps in proper combination of factor inputs
• It helps in wages determination, e.t.c
. There are four factors,means or agent of production; this are:LandLabourCapitalEntrepreneur
DESCRIBE LAND AS A FACTOR OF PRODUCTION?
Land in economics refers to free gifts of nature. It is not just the Earth surface but it is it also includes natural resources such as water, sunshine, weather, Forest, mineral deposits, animals, hills and fishing ground
.WHAT ARE THE CHARACTERISTICS FEATURES OF LAND?
.WHAT ARE ECONOMIC IMPORTANCE OF LAND?
THE LAW OF DIMINISHING
RETURNS
The law of diminishing returns state that has successive units of a variable factor or resources is applied to a given fixed factor, example land, output will increase at first but it will get to a point at which the addition of one more unit of the variable factor will result in less additional units of output.
CONCEPT OF TOTAL, AVERAGE AND MARGINAL PRODUCTIVITY
TOTAL PRODUCT (TP)Total product refers to the total quantity of goods produced at a particular time as a result of the use of all the factors of production.
It can be expressed mathematically as :TP = AP × Qwhere; TP = Total product            AP = Average product             Q = Quantity or Unit of Output
AVERAGE PRODUCT (AP)Average productrefers to total Total divided by the number of variable factor of production lab
our. It can be expressed mathematically as:AP = TP/ Qwhere; AP = Average product            TP = Total product             Q = Quantity or Units of Output .
MARGINAL PRODUCT (MP)this is the additional products produced as a result of the application of additional unit of a variable factor when all other factors are fixed full-stop it is expressed mathematically as:MP = ∆TP/ ∆Q = TP1 - TP0 / Q1 - Q0
.WHAT IS THE RELATIONSHIP BETWEEN TP, AP and MP?
The relationship between total product,  average product and marginal product are as follows: The AP reaches its maximum at point J at the typical. The point TP curve. The point J is what point at TP curve where a ray of line drawn from the origin touches the TP curve at a point of inflection. As that point, output can still be measured by applying more variable inputs to the fixed input.The input level at which MP is equal to zero corresponds to the point at which TP curve maximum.
WHAT IS LABOUR AS A FACTOR OF PRODUCTION?
Labour may be defined as all human efforts both physical and mental that are directed towards production. Labour can also be described as the varieties of natural talent available within the society. The reward for labour is wages.
WHAT ARE THE CHARACTERISTICS FEATURES OF LABOUR?
Labour us human factor, thus it's is controllable.Labour is sensitive to the environment in which it works.It requires skills through training.Labor needs motivation in order to increase productivity.labour changes either positively or negatively according to circumstances.Label is not storablelike capital.
WHAT IS CAPITAL AS A FACTOR OF PRODUCTION?
Capital which is one of the factors of production is the stock of previous wealth invested in order to obtain future wealth. Capital may be tools or equipment that make the production of goods and services possible. The reward for capital is interest.
WHAT ARE THE CHARACTERISTIC FEATURES OF CAPITAL?
Capital could either be in physical or liquid form.the physical capital includes tangible assets such as buildings, motor, vehicles , machines, e.t.c.liquid capitalism form of money which can easily be converted into physical capital.Capital is highly durable.Capital is a man-made factor of production.Capital is subject to depreciation.Capital is large-scale production and division of labour.
WHAT IS SOCIAL CAPITAL?

Social capital consists of those capital goods which are collectively owned, that is, the social infrastructure. Social capital consist of a nation's or community's stock of social assets such as public hospitals and schools, roads electricity, pipe borne water, e.t.c.

WHAT IS FIXED CAPITAL ?
This is an adorable assets that can last for a very long time and are required in the production process. Examples include: machineries, buildings, motor vehicles, furniture, e.t.c.
WHAT IS CIRCULATING OR WORKING CAPITAL?
This type of capital includes all materials, cash in hand that can easily be converted into final goods.
WHO IS AN ENTREPRENEUR?
An Enterpreneur is one of the factors of production. It can be defined as a factor of production that bears the risk of business activities, co-ordinates and organizes all other factors of production for the production of goods and services. The reward for entrepreneur is either profit or loss
WHAT ARE THE FUNCTIONS OF AN ENTREPRENEUR?
He manages the business he is responsible for the management of the business he plans controls and motivate all other factors of production.
Factors that determines volume of production
FIRMS
It is a business unit established for the purpose of carrying on some kind of economic activities like production and distribution of goods and services it is a business unit of decision-making in an economy a firm can also be referred to as a business organisation which owns and direct the activities of one or more of it plants or offices in firm is a unit of industry it includes sole trading partnership and joint stock company example of firms in Nigeria's are dangote cement Cadbury Nig PLC etc
AN INDUSTRY
An industry can be defined as a group of firms producing similar products for the same market the industry is made up of many firms examples are the banking industry the construction industry the manufacturing industry and the transportation industry.
Classification of a firm.
A firm can operate idle on a smaller scale it can be divided into small or large first for instance.
SMALL FIRMS
These our business units whose productive capacity and scale of operation and small they require a small amount of capital to set up and operate small firms are mainly found in the primary sector.
Features of small firm
LARGE FIRMS
These organisation whose scale of operation is large large firms require much capital outlay to finance their operation they also embark on Mass production of goods large firms can finance their operations through loans from financial institution they are found mainly in the secondary and commercial sectors EG Nestle Nigeria PLC Cadbury Nigeria PLC.
Features of large firms.
Large-scale production this organisation embark on Mass production of goods this is made possible because of their operation which involve capital-intensive last fence used specialised equipment to produce goods.