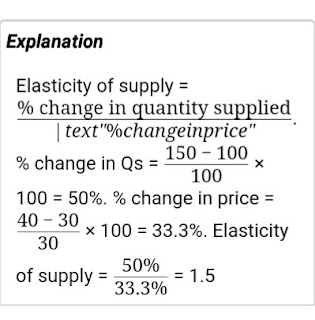 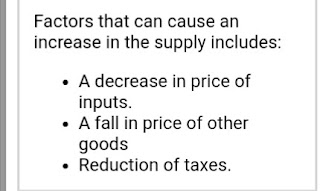 QUESTION 2
(a) Explain the concept of diminishing marginal utility.
(b) How is utility maximized.
SOLUTION
(a) Diminishing marginal utility is concerned with consumption. The concept states that the satisfaction derived from consuming each additional unit of a commodity will diminish as the total consumption increases as more is consumed, of the marginal utility decreases.
For Instance, the first cup of cold pure water will give a high level of satisfaction to a thirsty consumer during a hot day. However the second cup will not give him as much satisfaction as the first one.
(b) Utility is maximized when a consumer allocate his expenditure among commodities in such a way that the utility he derives from the last Kobo he spends on each commodity is the same.
For a commodity, utility is maximized when the satisfaction derived from it is equal to the last Kobo spent on it. This condition can be expressed as follows:
MUx = Px
where;
MUx = marginal utility derived from commodity x
Px = price paid
For two commodities, utility maximization can be expressed as
MUx / Px = MUy / Py
QUESTION 3
Explain the factors, which influence the level of employment in your country.
SOLUTION
QUESTION 4
(a) Why is scale of preference important?
(b) Explain the concept "Opportunity Cost".
(c) State the opportunity cost in each of the following actions.
(i) A shirt was purchased for 500 naira instead of a pair of shoe.
(ii) Onions were planted on a farm realizing 20,000 instead of maize that would have realised 25,000
SOLUTION
Scale of preference is important because:
(b) Opportunity cost is the best alternative forgone or the real cost of purchasing one commodity instead of the other. For instance, if a student, who has only #10 with him is faced with the option of buying a biro or a pencil, if he decides to buy a pencil instead of a biro, the opportunity cost is the biro while the money cost is the #10 he paid for the pencil.
(c) the opportunity cost in the actions is:
(i) A pair of shoes
(ii) Maize
QUESTION 5
Why do government conduct population census
SOLUTION
QUESTION 6
(a) What is Monopoly?
(b) state the basis for Monopoly in a society.
SOLUTION
(a) Monopoly can be defined as a situation where there's only one producer or supplier of a particular commodity and who has the power to influence the price of the commodity at his own favour.
(b) The basis for Monopoly in a society: